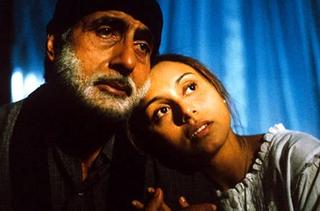 Last week I watched a critically acclaimed BLACK. Another different movie after SWADES. Black is a good movie. Great effort by the director Sanjay Leela Bhansali. Sometimes he has concentrated more on technical wizardry but overall it’s an unusual experience for the viewer. Really it require guts to make such kind of film. I’ll be not discussing the theme, story of the film here.
Dialogues play a major part in this film. They are simple yet very meaningful. And then we can easily relate them to our life. Dialogues from the scene when Michelle is interviewed for the admission to college are too good. She is asked ‘Duniya mein kitne mahasagar hain?’ Michelle answers “Pani ki har ek boond uske liye mahasagar hai”. I found this dialogue very relevant to mindset of today’s youth and the people of my age. The young, dynamic professionals. Michelle interprets every drop of water as oceans because she can’t see, hear. But it also shows that every human being should enjoy happiness from every little thing in this world. Michelle, instead of crying on why she can’t see the oceans in the world, creates ocean out of a drop of water.
Another dialogue is when Michelle says “What knowledge mean to her?” She says “Knowledge is everything. Knowledge is teacher”. I’m afraid today how many children can say this. Because everywhere I see most of the times students always complain about their teachers. Then they join private tutions and all. I think this is a failure of teachers. Yes, I do agree that students may be wrong somewhere. But finally if students are not going wrong then who is going to be? That’s why a good teacher is required to show a student a right path. But this is not happening.
The another great aspect of BLACK is the thorough study of blind and deaf people done by the director before venturing into making this movie. At least I didn’t found any moment in BLACK, which has been shot without doing any study.
Sanjay Leela Bhansali shows that a good movie can be made on such a different subject. Before watching BLACK I was told that there is heavy dose of emotions and rona-dhona. But after watching BLACK I felt that at least there is some base to these emotions and rona-dhona. It’s better than those pathetic so called emotional scenes in films like Veer-Zaara.
I suggest that at least to promote such kind of movies everyone must watch BLACK once.