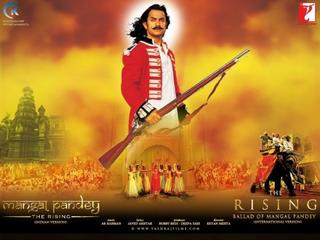 Finally it begins. The much awaited ‘Rising’ promos are on air now. And promos are looking very promising. The promo is hardly of 1 minute duration. Promo opens with the titles and then Aamir Khan climbing the stairs and in the background song ‘Mangal Mangal’ by Kailash Kher is played. The film was in news since it was announced. There were a lot of reasons. A hefty amount paid to Aamir, Aishwarya Rai walked out of the project and all. But Rising will be a great relief for Aamir Khan fans as he returns to the big screen after a four-year sabbatical. Many big names besides Aamir Khan have been associated with this project. A. R. Rahman, Javed Akhtar and all. With ‘Mangal Mangal’ A. R. Rahman again proves that he is the one in giving music to period films. After ‘Bose – The Forgotten Hero’ Rising will be another feather in cap. But still we all have to wait till 12th august when ‘The Rising’ releases all over the world.