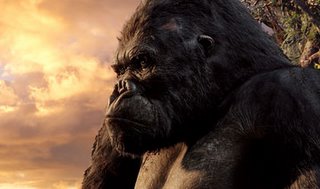 KING KONG has arrived again and this time master story-teller, a man behind Lord of The Rings triology “Peter Jackson” brings it back to the screen. This KING KONG is not just about a giant ape and how he climbs the empire state building in New York. This one is Peter Jackson’s fascination about monster movies and after LOTR triology he proves it again that he is the best in business.

As titles start rolling and first scene opens, you are taken to New York in 1930s where the story takes place. KING KONG begins with Carl Denham (Jack Black) losing the star of his next movie and how he comes across Ann Darrow (Naomi Watts), a struggling actress from a theater group, which has closed down. Carl convinces Ann to start in his next movie and along with his play writer Jack Driscoll (Adrien Brody), Lumpy (Andy Serkis) and captain (Thomas Kretschmann) on a voyage to find a mysterious Skull Island where he wants to shoot his movie. Almost after an hour KING appears on the screen. Still the story moves forward on the ship and takes time for developing all the characters. Still we get hooked to the screen because of Peter Jackson’s detail and descriptive narration of New York in 1930s, the events leading to voyage to Skull Island and the actual voyage.

Carl, Ann, Jack and others land up on the Skull Island we come across many unusual things – Skull Islanders, dinosaurs, lizards and creatures. Skull Islanders capture Ann to sacrifice her to mighty KING KONG. For a KING KONG a human sacrificed to him is way of entertainment rather than prey. Then moving forward it’s about how Jack, Captain, Lumpy and the crew bring back Ann and capture KING KONG. There are enough thrilling sequences between human characters and lizards. To point out some – a battle between 3 T-Rex es and KING KONG, human characters running between giant lizards. However, the story, an emotion, chemistry between a giant ape and Ann, which makes this KING KONG different. Even though once KING KONG starts running on the streets of New York and climbs up Empire State building it’s the chemistry between blonde and a giant ape, which every time moves you.

Performance wise Adrien Brody is convincing. But real show-stealers are the mighty KING KONG and Ann Darrow. Full marks to Adny Serkis for the pot After potraying Gollum in the lord of the rings, Andy Serkis delivers yet another towering performance. Ann Darrow – what should I say about Naomi Watts? Naomi Watts delivers a sincere flawless performance. One can not imagine anybody else other than Andy and Naomi playing KING KONG and Ann. After show is over you understand what job writers have done when they penned down these characters on paper.

(For KING KONG also Peter Jackson again teams up with Fran Walsh and Philippa
Boyens for writing a screenplay).

Final word – KING KONG is a story of a giant ape. It is having enough thrills, special effects but beyond all this what works on screen is amazing story-telling by Peter Jackson.