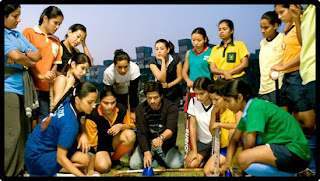 Watch Chak De and feel patriotic but not in conventional jingoistic way.  Chak De is an amazing film but I am not going to write a review of Chak De here. Chak De is having some great moments and of course bravura performances by Shahrukh Khan and team of 16 girls. No doubt about it. However, to me the real stars of Chak De are writer Jaideep Sahni and director Shimit Amin. Certainly, Indian film industry is evolving and making different kind of films. Chak De is a very good example of a great collaboration between a screenwriter and a director. Jaideep Sahni and Shimit Amin receive distinction marks for their job. It feels great to see that these days new screen writers are coming up and there are directors who are giving justice to the scripts. I hope now onwards the job of screen writing will not remain a neglected job. More and more screenplay writers can see their stories translated on to celluloid. And kudos to Aditya Chopra for making such kind of film instead of routine YRF romances.